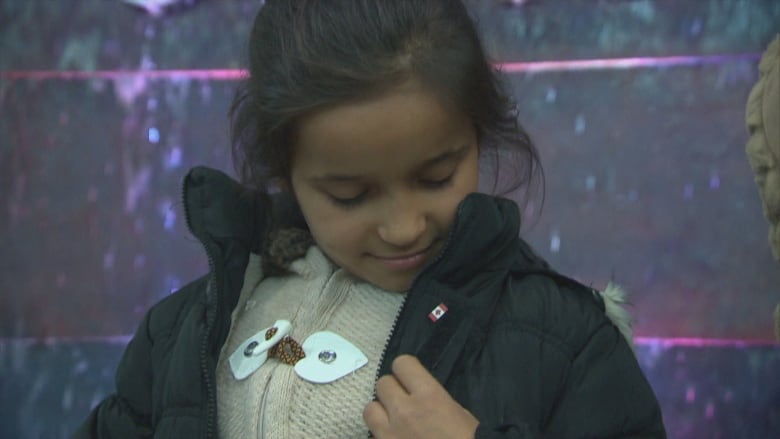 Manar Sultan, 9, checks out the maple leaf pinned to her jacket by one of the Syrian refugees who sponsored her family to come to Canada. The family arrived in Ottawa Tuesday, and will settle in Brockville, Ont. (Sandra Abma/CBC) 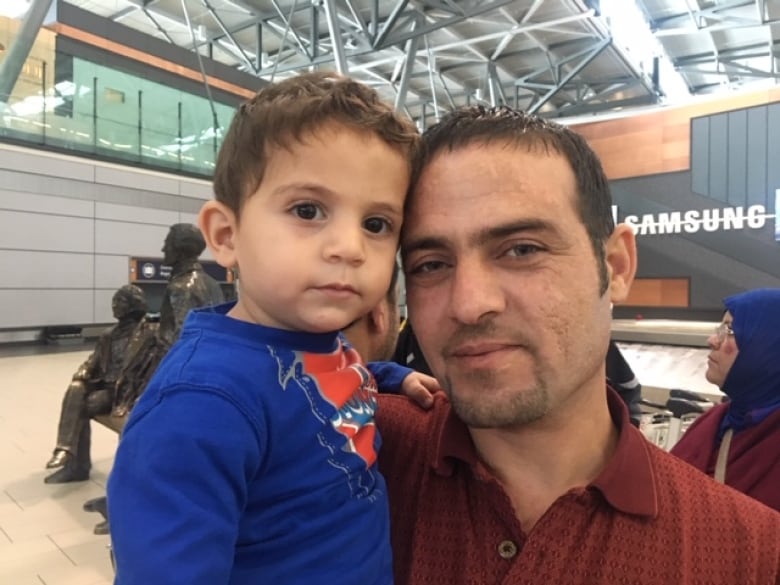 Sponsor Ahmad Alkafrei holds his son as he waits to meet the refugee family at the Ottawa International Airport. (Sandra Abma/CBC)

The sponsorship program the families are taking part in is administered by the Refugee Hub at the University of Ottawa and funded by two charitable groups, The Shapiro Foundation and The Giustra Foundation, as well as six other donors in Canada and the U.S.

Together, they’re donating  $3.5 million dollars to 150 sponsor groups across the country to support the resettlement of 685 refugees, drawn from a list compiled by the United Nations.

After a prolonged discussion in Arabic, the translator, Brockville businessman Ahmad Khadra, declared the group had decided to open their arms to a family they didn’t know.

“I told them, ‘You are not a refugee anymore. You are now 100 per cent Canadian, and Canadians love to do something good,'” said Khadra, who came to Canada from Syria in 1995.

Khadra was also at the airport Tuesday, handing out cups of strong Syrian coffee to the new arrivals.

The sponsors have rented a furnished apartment in Brockville for the Sultan family, and will be close by to help them access food, clothing and medical care. They’ll also be able to point them to the best places for Arabic food and other small comforts that will help the family ease into their new life in Canada