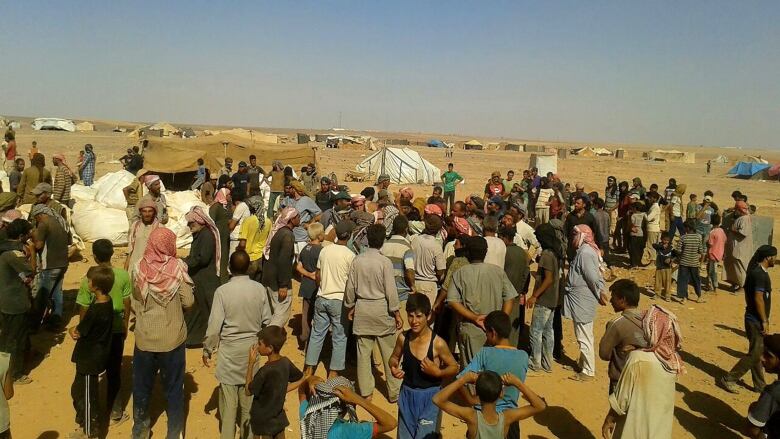 People gather to take basic food stuffs and other aid from community leaders distributing supplies to the 64,000-person refugee camp called Ruqban on the Jordan-Syria border in 2016. (The Associated Press)

Whitehorse-based charitable group Yukon Cares is hoping to bring four more refugee families to the territory within the next year or two, according to its president, Raquel de Queiroz.

She said Yukon Cares — which sponsored the first Syrian refugee family to come to Yukon, two years ago — is working on a number of refugee files.

The community organization was founded to re-settle refugees in the territory. It’s now assisting an Eritrean man who has come to Canada from Israel, de Queiroz said.

It is also waiting for the final clearances for a single Syrian man and a Syrian family of five, said de Queiroz. They are relatives of the Aarafats, the first family who came to Yukon. 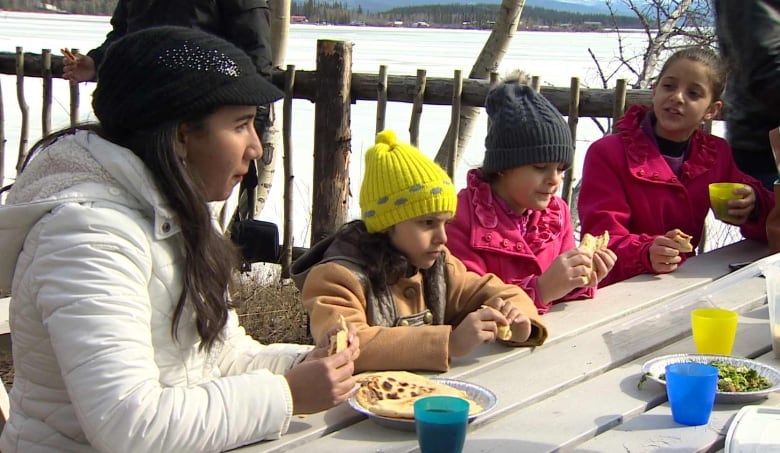 Raquel De Queiroz, far left, with three of the Aarafat sisters, in 2016 at Swan Haven on Marsh Lake. The Aarafats were the first Syrian refugee family to arrive in Yukon, and have since moved to Ontario. (Dave Croft/CBC)

De Queiroz said knowing how long it will take for the newcomers to arrive is like predicting the weather — it’s hard to know.

“It’s really up to the speed of the government at the federal level at this point, and all we can do is advocate for things to be processed faster,” she said.

Yukon Cares has also applied to become part of a federal government program set up to help refugees. The program covers half the cost of supporting refugees during their first year in Canada with community sponsors covering the rest, said de Queiroz.

Those refugees have been pre-approved by the government so they can arrive in Canada relatively quickly once they’ve been paired with local sponsors, she said.

Yukon Cares has raised enough money for two families under that plan, she said.