Rahaf Mohammed al-Qunun ‘very, very happy to be in her new home’ after landing in Toronto

Saudi teen who fled family ‘very, very happy to be in her new home’ after landing in Toronto 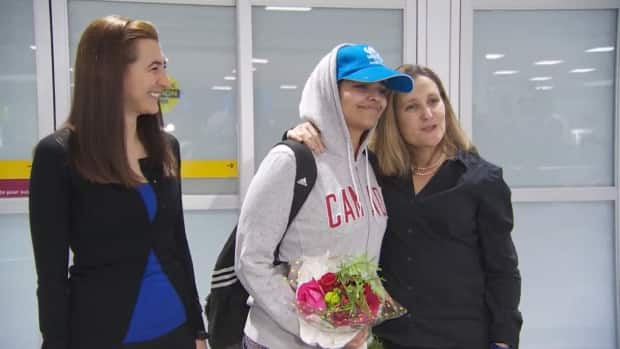 A Saudi teen who was granted asylum in Canada after fleeing from her allegedly abusive family has arrived in Canada.

Her flight from Seoul, South Korea, landed in Toronto a day after Prime Minister Justin Trudeau announced his government would accept 18-year-old Rahaf Mohammed al-Qunun as a refugee.

Al-Qunun, wearing a hoodie emblazoned with the word Canada, waved to reporters as she walked through Toronto’s Pearson International Airport, but did not comment on her arrival in Canada.

She was accompanied by Foreign Affairs Minister Chrystia Freeland, who said al-Qunun will be going to her unspecified “new home.”

“She is obviously very tired after a long journey. And she preferred to go and get settled,” Freeland said of al-Qunun, who declined to speak to reporters.

Al-Qunun did, however, take some time to pose for photographs with Freeland.

“She wanted Canadians to see that she’s here, that she’s well and that she is very, very happy to be in her new home,” Freeland explained.