The Immigration and Refugee Board now fast-tracks “less complex” asylum claims by reviewing evidence without a full hearing as backlog climbs to 74,000 cases with wait times of up to 24 months. 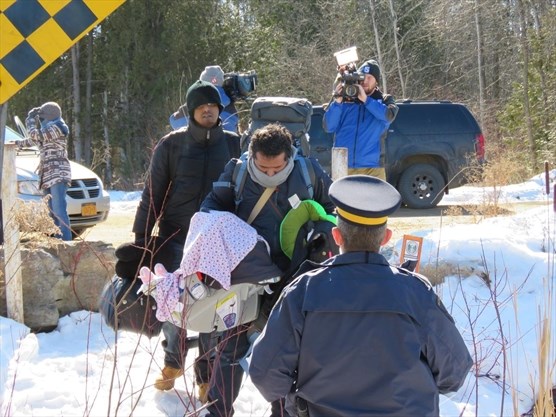 A group of irregular migrants — two men, a woman and a baby — cross the border from the United States into Canada, near the Quebec town of St-Bernard-de-Lacolle, in February 2017. Canada is now fast-tracking asylum claims from selected countries. – Allan Woods , Toronto Star File Photo

Overwhelmed by asylum claims from irregular migrants crossing the U.S. border, the Immigration and Refugee Board is fast-tracking “less complex” cases from selected countries.

On Tuesday, refugee judges began assessing claims under what is known as a file-review process — meaning a decision is made based on submissions from claimants — without a hearing — and a short-hearing process, where there are few disputable issues.

In December, the board started triaging the claims based on two newly created lists of countries and claims. In total, 25 refugee judges have been assigned to the new effort.

To qualify for the file-review process, a claimant must be from one of 14 countries: Afghanistan, Burundi, Egypt, Eritrea, Iran, Iraq, Libya, Pakistan, Saudi Arabia, Sudan, Syria, Turkey, Venezuela and Yemen.

However, not every claim from these countries will be automatically expedited.

For instance, only those Saudi Arabian claims alleging persecution based on gender or religious sect can be assessed without a hearing. For asylum seekers from Libya, claims must involve corruption, extortion, kidnapping or threat of kidnapping by militias.

Only some claims from 11 countries are recommended for short hearings: sexual orientation persecution in the Bahamas, Barbados, Iran, Russia, Rwanda and Venezuela; fleeing criminality and corruption in Nigeria, Peru, Saint Vincent and St. Lucia; and threats in Djibouti due to one’s political opinion and activism.

According to the refugee board, these countries and claims were selected for faster processing because they have an acceptance rate of 80 per cent or higher and the type of risks the asylum seekers face are generally well documented.

Officials said a failed claimant under the file-review process is entitled to a full hearing by a refugee judge.