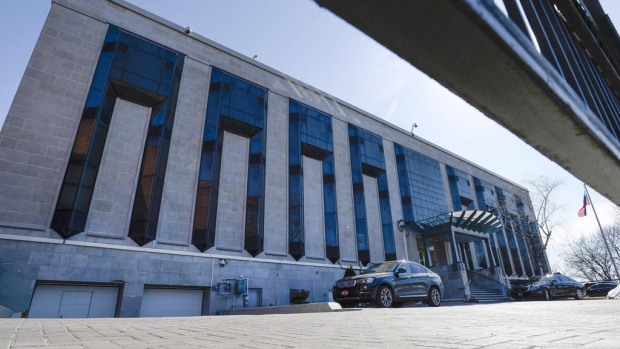 The Embassy of the Russian Federation to Canada in Ottawa is seen on Monday, March 26, 2018. THE CANADIAN PRESS/Justin Tang
Teresa Wright, The Canadian Press
Published Thursday, June 27, 2019 4:20AM EDT

OTTAWA — A Russian student who was invited to present her research at an upcoming academic conference in Canada says she believes her visitor visa was unfairly rejected — an issue scholars say is a growing problem for academics from certain areas of the world trying attend conferences in Canada.

Marina Dubova was all set for a conference on cognitive science and artificial intelligence in Montreal next month, but was recently informed her application for a visa was rejected.

She said friends and colleagues warned her not to bother applying at all, as she was told single women without children are often rejected for these reasons. But as a student of cognitive science, this conference is the biggest in her field and important for networking and seeing the latest research being explored by her international colleagues.

Tags: European visitors, immigration, russian
◀ Minister Hussen dissapointed that majority of Canadians think immigration should be limited
The foreign students who say they were lured to Canada by a lie ▶